Skillet fried potatoes prepared in a cast iron skillet were a staple in both of our families homes. My aunt would add onions and sugar to her fried potatoes.

Russet potatoes hold up best to the frying. Onions, bell peppers, rosemary, and garlic are other great additions to the skillet.

Make sure to pat your sliced potatoes dry before putting them into your cast iron skillet. Also, do not overcrowd the slices.

Use enough oil to keep your potatoes from sticking.

Whether it is breakfast, lunch, or supper, fried potatoes make any meal special. 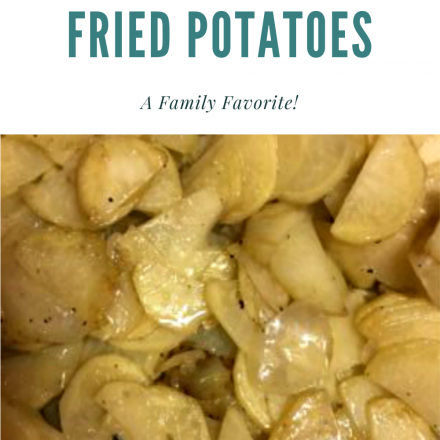 Cheryl
Skillet Fried Potatoes prepared in a cast iron skillet were a household staple when Mike and I were growing up.  My aunt would add onions and sugar to her fried potatoes.
No ratings yet
Print Recipe Pin Recipe
Course Side Dish
Cuisine American
Servings 4

Keyword cast iron skillet fried potatoes
Tried this recipe?Let us know how it was!

As an Amazon Associate,  I earn from qualifying purchases.

My favorite brand of cast iron skillet is Lodge:

""As an Amazon Associate, I earn from qualifying purchases."

Would love your thoughts, please comment or ask a question! Cancel reply

"As an Amazon Associate, I earn from qualifying purchases."